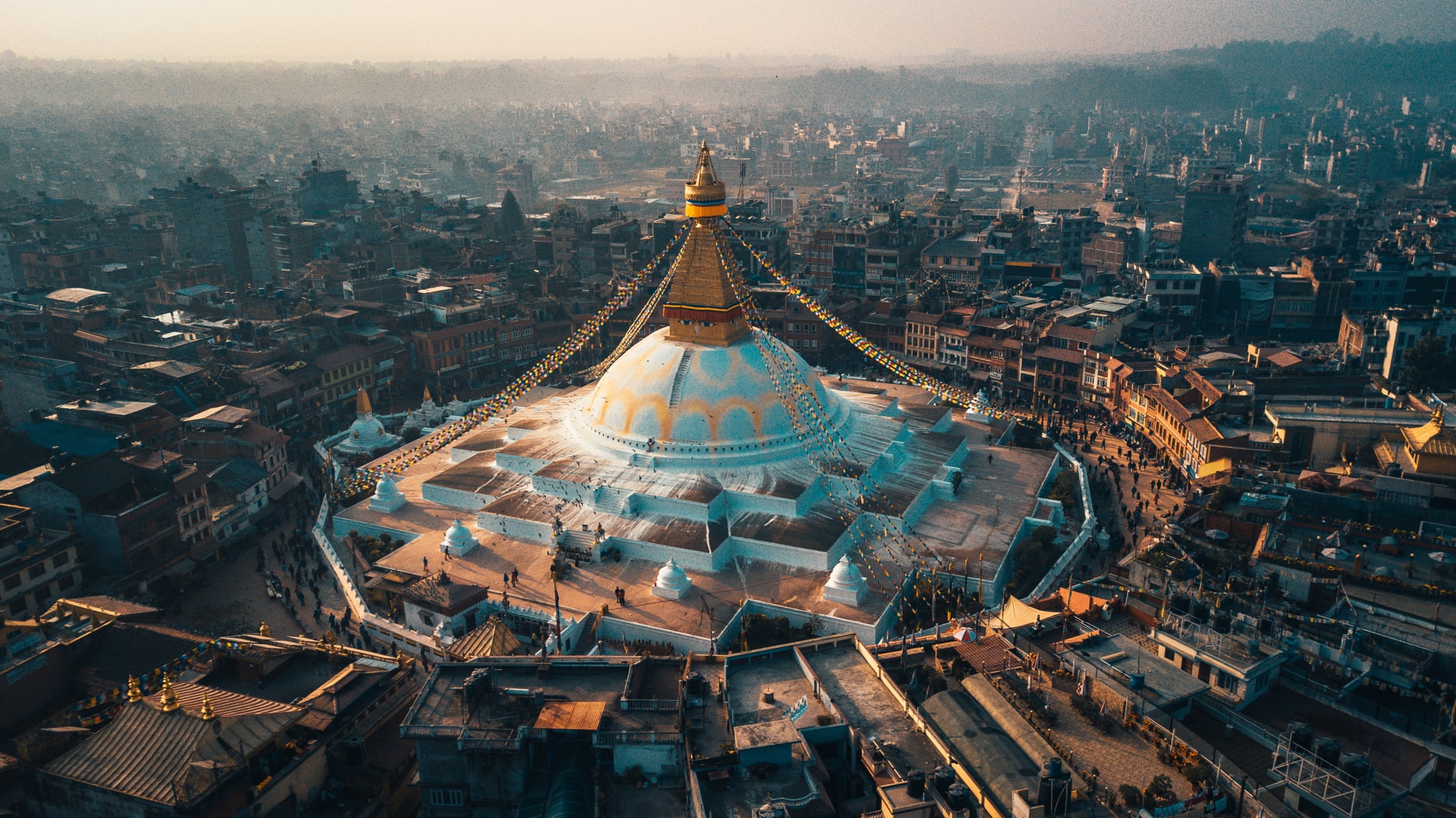 From the majestic Himalayan peaks in the north, fertile Tarai plains near the Indian borders, and rivers crisscrossing the entire terrain, Nepal is full of possibilities for every kind of traveler. The tiny landlocked nation sandwiched between India and China boasts of being home to eight of the ten highest peaks in the world including the loftiest of them all Mount Everest.

​Within a short distance, Nepal’s topography changes from the alluvial Gangetic plains suitable for agriculture to the frozen wastes of the Himalayan Mountains. Between the two extremes lie the middle hills and the lesser mountains. There are several inner Himalayan valleys with desert conditions at altitudes above 3,600m.

​Along with the fertile Tarai Region lie the Chitwan National Park, Bardia National Park, Shukla Phanta Wildlife Reserve, and the Koshi Tappu Wildlife Reserve that harbor an amazing variety of wildlife including endangered species such as the elusive Royal Bengal tiger, the one-horned rhinoceros, and Gangetic dolphins along with rare species of birds. 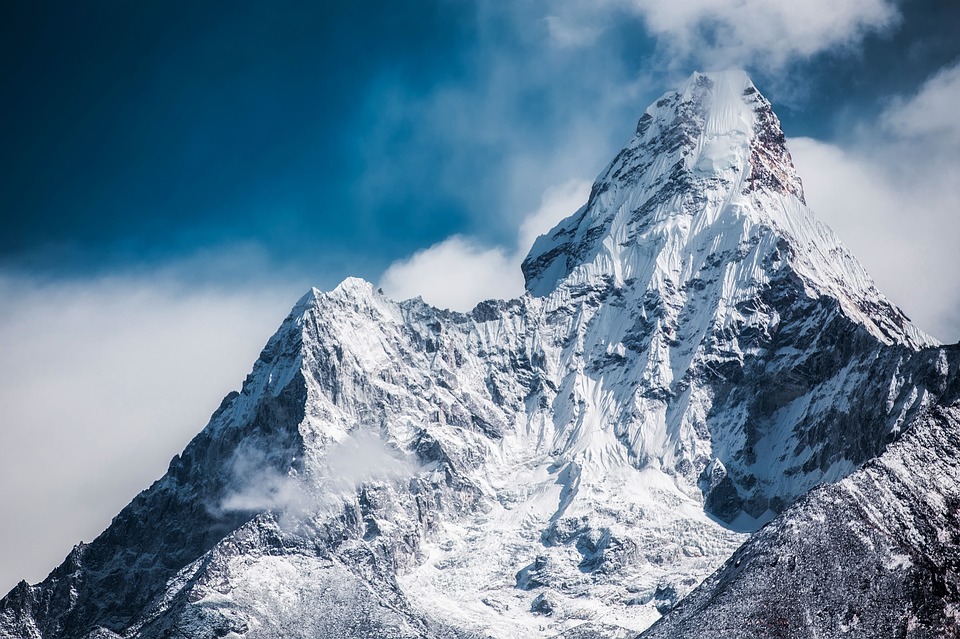 The history of Nepal goes back centuries ago as far back as the Neolithic Age. It finds mention in both ancient Hindu epics and Buddhist texts. Being the birthplace of Siddhartha Gautam, the prince who left his throne to seek Enlightenment and Buddhahood, it figures prominently in the annals of Buddhism. Nepal also enjoyed an important role in the Silk Route with several trading centers emerging within its borders up to the fertile northern plains of India. ​

The Newari people, residing in the Kathmandu Valley since the 4th century CE, along with the Gorkhas, who invaded the valley in the mid-18th century, were instrumental in the formation of modern-day Nepal. Nepal assumed the approximate dimension of a unified and modern state under the rule of King Prithvi Narayan Shah only towards the latter half of the 18th century. It came to be known as the Gorkha Kingdom and has a unique distinction of having never been colonized to date. ​

The Kingdom of Nepal, formed in 1798, became the world’s only Hindu monarchy, ruled exclusively by a hereditary Prime Minister until its abolishment in 2008. Nepal’s government structure shifted from rule by the hereditary monarchy to a constitutional monarchy in 1951 and reforms in 1990 further decentred monarchical rule creating a multiparty democracy within the pre-existing constitutional monarchy. ​

Notably, Nepal is one of few states in contemporary Asia to have outlawed the death penalty. Furthermore, Nepal is the first state in Asia to extend full rights to LGBTQ+ citizens, legalizing same-sex marriage in 2008, and providing a Third Gender category to citizens who do not identify as “male” or “female”. 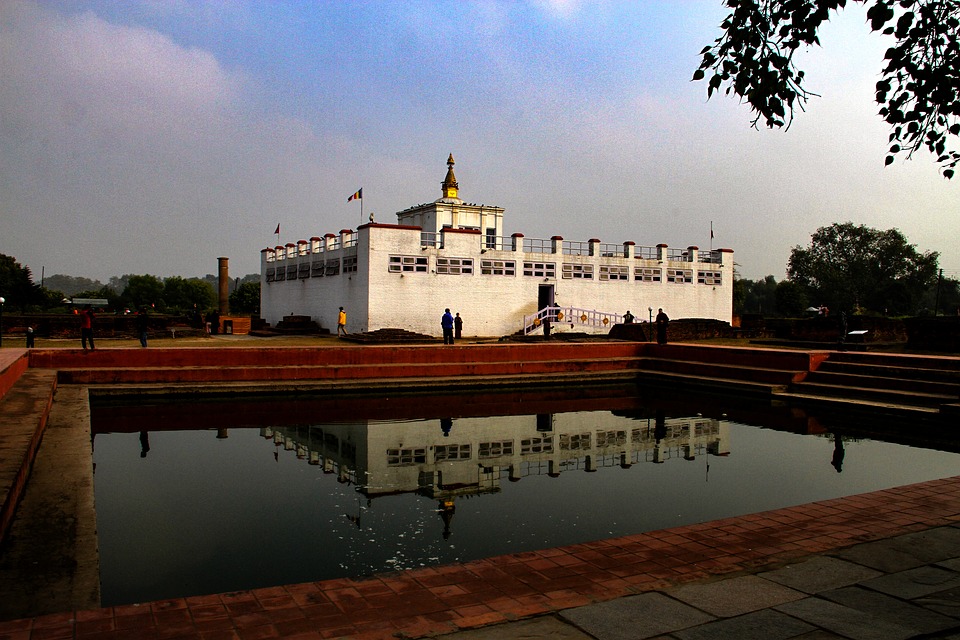 The population of Nepal is a diverse mix of different ethnicities, religions, and communities each with its own distinctive cultural identity. Within the nation, there are over 125 distinct ethnic groups speaking more than 123 different languages and dialects! ​

Nepal’s traditional living pattern is patrilocal where women move to the husband’s house post marriage. Nepalese society is predominantly patriarchal with the male head of the family being the central figure within the families. Usually, multiple generations of the family live in the same household. However, there are many instances of strong matriarchal families as well. ​

Women are often idolized and placed in a position of reverence as strong goddesses and praised for their virtues of purity and virginity. The cult of Kumari, where a prepubescent girl child is worshipped as the human manifestation of the Goddess Shakti. ​

The people of Nepal are proud of their culture, deeply religious, and aware of castes and social hierarchy. However, all communities live harmoniously and are warm and welcoming to visitors to their land. 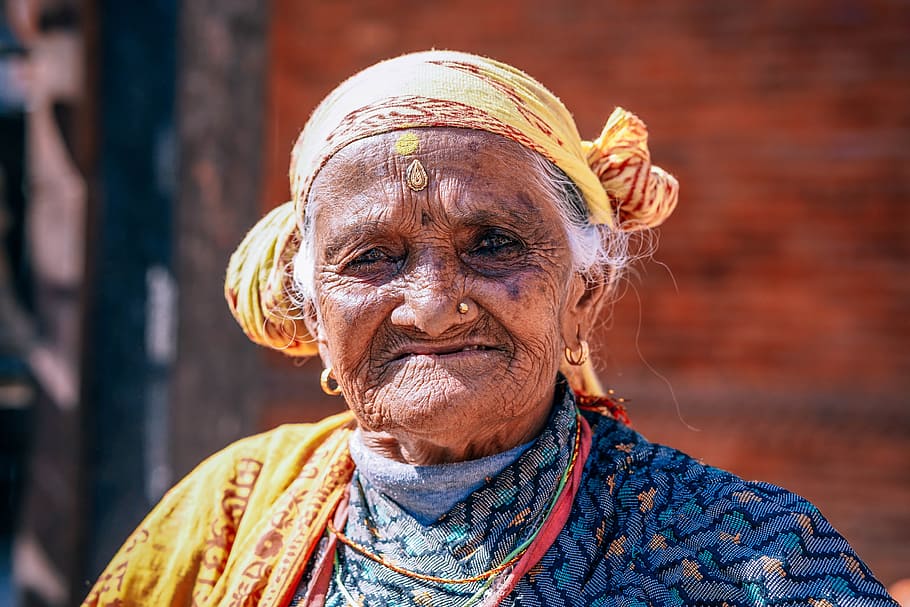 Nepal has deep religious significance for both Buddhists and Hindus. Though once the Hindu Kingdom, the Parliament declared Nepal as a secular country in May 2006. The majority of the population are either Hindus or Buddhists and both cohabit peacefully for centuries. Other religions practiced by the people of Nepal include Islam, Christianity, Sikhism, Jainism, Bon, animism, and ancestor worship. ​

In Nepal, the followers of both Buddhism and Hinduism worship Buddha as Hindus believe him to be an incarnation of Lord Vishnu. Buddhists worship the five Dhyani Buddhas representing the five basic elements. All the deities according to Buddhist philosophy are the manifestation of the Void or Shunya. Hindus also worship many of the Buddhist deities like Mahakal and Bajrayogini.​

​Hindus in Nepal worship the ancient Vedic Supreme Trinity of Brahma the Creator, Vishnu the Preserver, and Shiva the Destroyer. Shakti, the female manifestation of Shiva is another primary deity in Nepalese Hindu philosophy. There is also the cult of Kumari or the Virgin Goddess where people worship a girl child from a particular sect as the living incarnation of the Devi until she reaches puberty. ​

The multi-religious and multi-ethnic populace of Nepal makes its beliefs diverse and interesting. Most customs take their roots in the ancient principles of the different religious sects, and these can be seen in the traditional weddings, ahimsa or non-violence, and respect for all living beings. ​

It is a land of mysticism and heritage and regarded by many as the mythical Shangri-La. You are likely to find mystics preaching the ancient ways of living practiced by mendicants and ascetics. 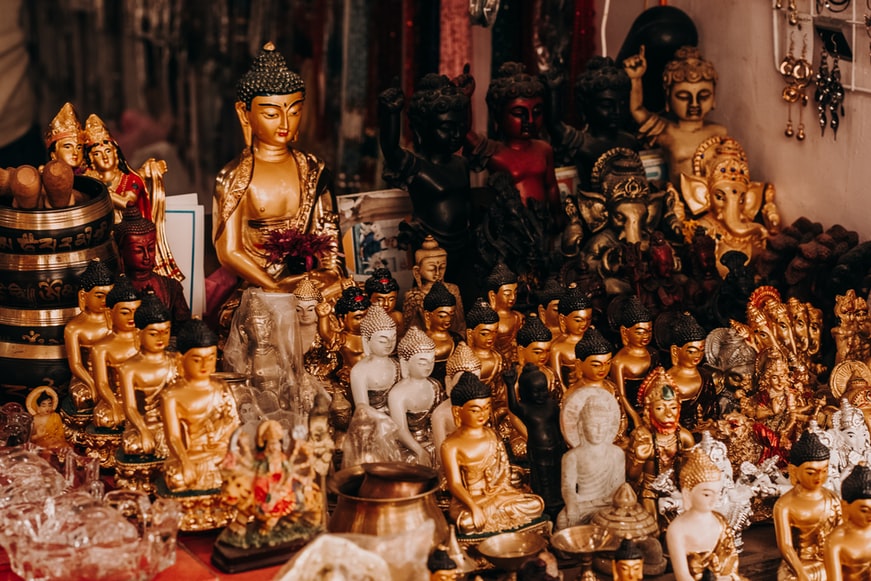 Nepalese art, architecture, and culture draw their inspirations from both Hindu and Buddhist religious philosophies. From the earliest use of natural dyes and pigments to the more modern Western realism that came in the mid-19th century, Nepalese art embraces an entire gamut of styles, media, and elements that are fascinating for the art aficionado.  Though the Western influences are a much later addition to Nepalese paintings, they are definitely popular in modern times. ​

​The two general forms of art in Nepal are paintings and sculpture. Both are highly influenced by the culture of the people and the two are often deeply interwoven. The artwork is generally very delicate, highly decorative, and strongly influenced by the culture of the period. Paintings are usually seen in two forms- manuscripts and Thangka. Both ensue from deep religious philosophies with various divine figures as subjects. ​

The architecture is exquisite and follows traditional techniques. Ancient cities of Kathmandu, Patan, and Bhaktapur are the best standing examples of the older techniques of architecture. However, the earthquake in the April of 2015 resulted in the massive destruction of a number of these magnificent structures. Since then, a number of these buildings have been renovated. 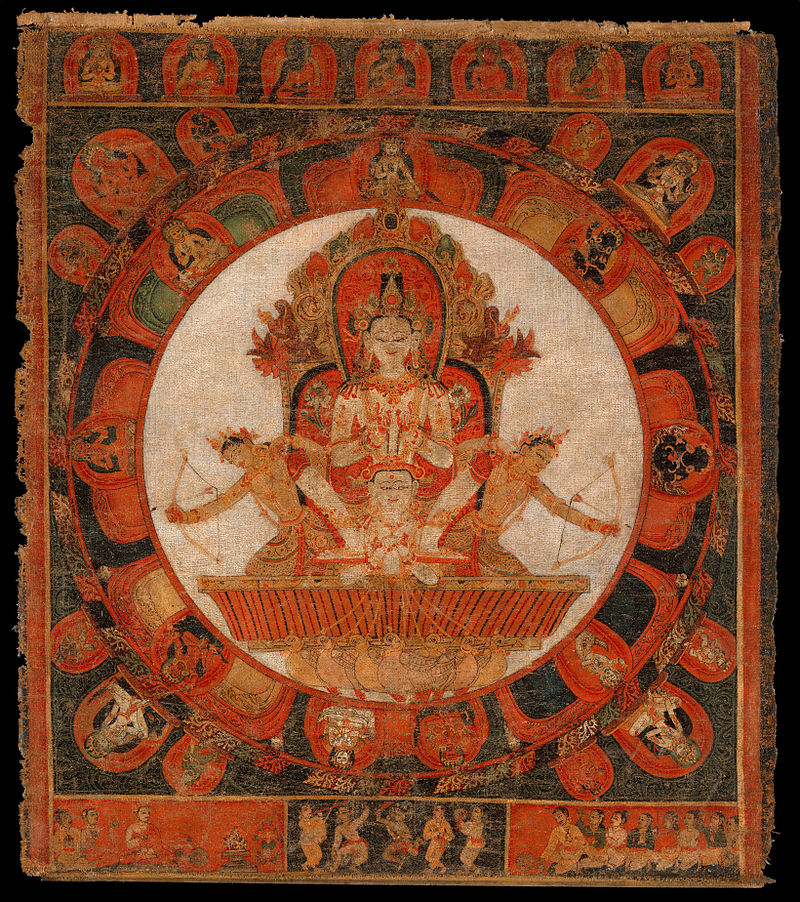 Nepalese food is a happy synthesis of Indian and Tibetan flavors. It is wholesome and nourishing prepared with locally available produce and spices. Dal (lentil soup), Bhaat (plain rice), and Tarkari (vegetable curry) are the staples available across the country. Pickles, lemon slices, and raw green chillies are served as accompaniments. Regional variations and additions are available in different places. ​

Special meals and dishes are prepared during the Tihar festival. These include patre, sel roti, and finni roti. Different types of curried meats, spicy pickles, and rotis, are also served in a traditional Nepalese meal. Excellent fish curries with piquant sauces are found in the Tarai lowlands of the country. ​

Thakali cuisine is well known for its marvelous spread and delicious and heavy lunches. Kathmandu and Pokhara are the best places to try this sumptuous cuisine. Newari snacks such as chatamari (Newari Pizza) are the best in the country. They make use of different kinds of meats, vegetables, and bamboo shoots to make delicious soups and savory snacks. ​ 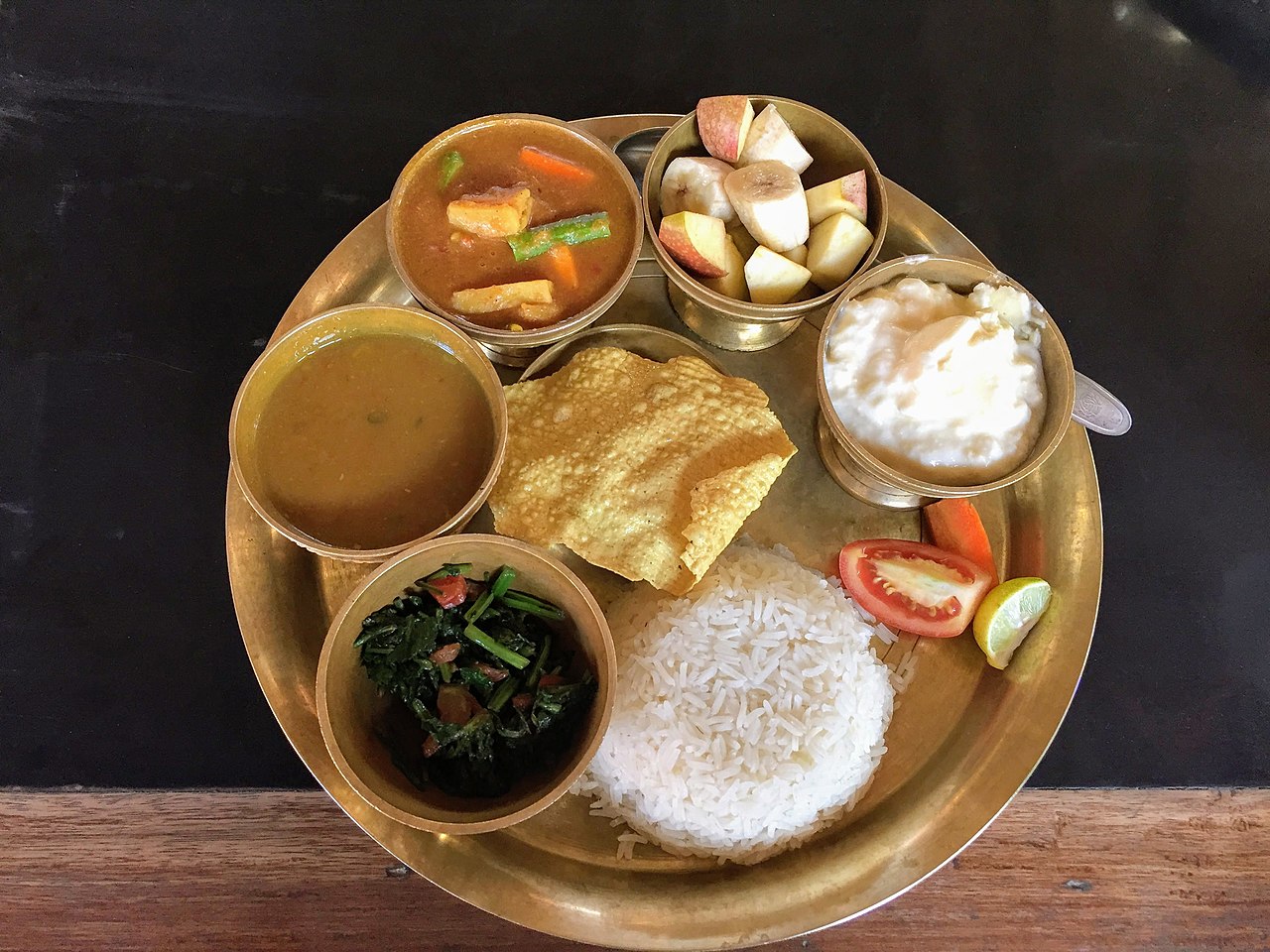