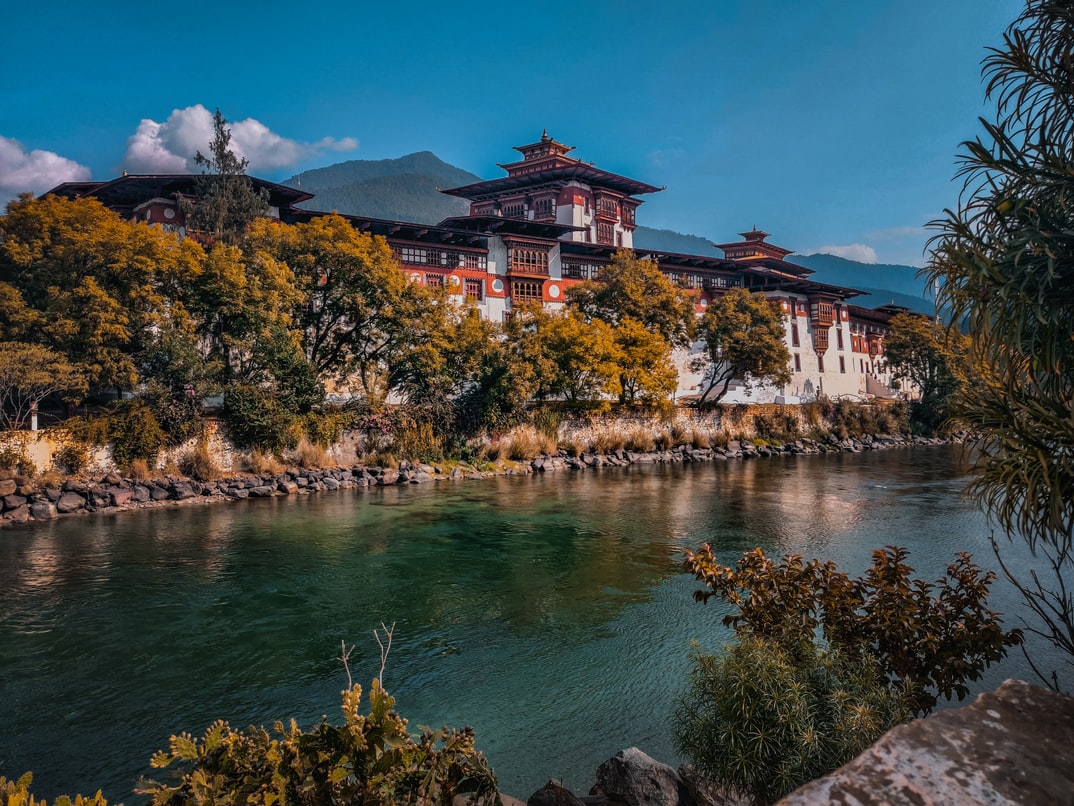 Punakha district is in the east of Bhutan’s capital city, Thimphu. The name has been acquired from the word Pungthan-kha which means ‘the gathering ground’. The
Dzong (fortress-like building) stands at the confluence of the two rivers that flow through the valley. The structure does look like piles of debris gathered by the rivers. Hence the name gathering ground’.

Officially, the Dzong here is named Punthang Dewachengi Phodrang. The crude translation would mean ‘the blissful castle at the gathering ground’. The Dzong was
consecrated in 1637 as the seat of the spiritual power of Bhutan and it served as the capital until the 1950s. The Monastic Body of Bhutan still considers Punakha as their winter capital and every year they migrate from Thimphu to their winter residence on the 1st day of the 10th Bhutanese month. On the way, thousands of devotees wait at different places to receive their blessings. They spend six months in Punakha before moving back to Thimphu on the first day of the fourth Bhutanese month.

It takes two hours to drive to Punakha from Thimphu. Some tourists make day excursions from the capital but most like to spend at least two nights there. Punakha
Valley is almost subtropical. The birdlife is very rich with the highlight being the white-bellied heron. This heron is Asia’s largest and endangered.
Only a few hundred are left in the world. Many migratory aquatic birds do visit the valley in the winter months. Blessed with sub-tropical vegetation, many varieties of insects thrive here. The valley does have reptiles like the King cobra. Of bigger animals, there are sightings of the Takin, the National Animal of Bhutan at the
northern end of the region. Takins closely resemble the Musk Ox and migrate to lower pastures in winter.

Punakha is also the cultural heartland of western Bhutan. The first King of Bhutan was crowned at the Punakha Dzong in 1907. Henceforth, all crowning ceremonies are held at this Dzong. One of the most fascinating temples in Punakha is the Khamsum Yelling and it has some exquisite wall frescoes. There are numerous temples, farmhouses, and viewpoints where one can go for day hikes. The temple of the Divine Madman is also in Punakha. Drukpa Kinley (1455- 1529) aka the Divine Madman taught radical teachings which made him popular amongst the common folks. The phallic image that adorns Bhutanese farmhouses in western Bhutan is associated with the Master. There are also numerous festivals in Punakha that one could time their visit with such as Punakha Dromche, Punakha Tshechu.