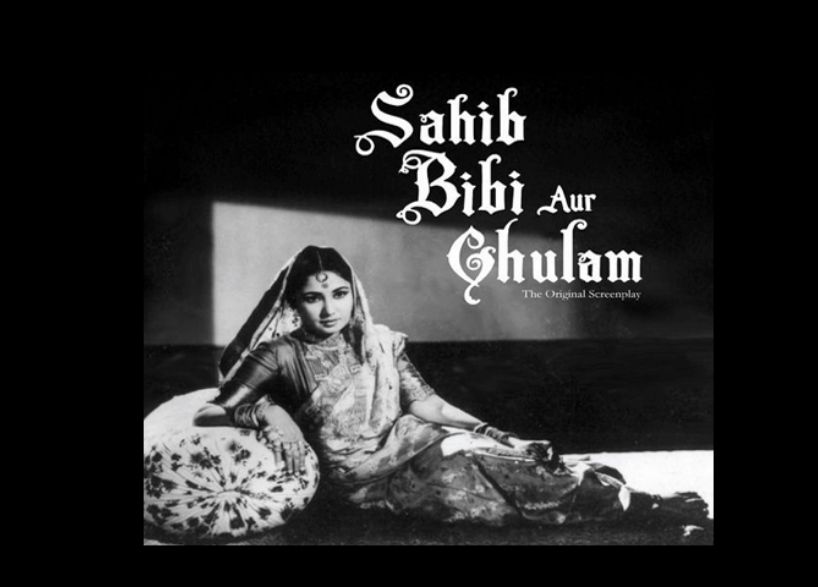 Sahib Bibi Aur Ghulam (literally translated to The Master, the Wife, and the Slave) is one of the greatest films ever made in India. The film (released in December 1962) revolves around the relationship between Chhote Thakur (the young wealthy scion), Chhoti Bahu (his wife), and Bhootnath (a servant), living in a grand mansion belonging to a powerful joint family of Zamindars (feudal landlords). The setting is that of 19th century Calcutta (now called Kolkata) during its phase of rapid industrial growth under the British Raj. The mingling of British and Indian culture resulted in the emergence of a new class of urbane Indians called ‘Babus’ whose members were bureaucrats and professionals working for the British East India Company. They usually belonged to upper-caste Hindu communities. In the 19th century, the Bengal Renaissance brought about an increased sociocultural sophistication among city denizens. The film portrays the gradual degeneration of the opulent grand mansion into an abandoned heap of crumbling ruins at the end of the film, signaling the collapse of the old age Zamindari

System (Feudal System) during the British Raj. The hero of the story is Bhootnath, a fairly educated young villager, who comes to Calcutta to seek his fortune. Here he gets shelter in a grand mansion where his brother-in-law works as a private tutor and stays in a small room in the mansion itself. In a few days, Bhootnath also finds a job in a sindoor (red vermillion used by married women) factory. Gradually he learns about the owners and the matters of the house.

While staying at the grand mansion Bhootnath comes across the stunningly beautiful and refined lady of the house (Chhoti Bahu) who is going through the pain of her husband completely neglecting her in preference for drinking and sleeping with prostitutes. Chhoti Bahu befriends Bhootnath in the hope that he will bring her the magical sindoor that will help her enchant her husband to stay back and

spend time with her rather than at the courtesans’ quarters. Chhoti Bahu tries to woo back her husband with increasingly desperate

measures to the extent that she herself starts drinking so that her husband doesn’t go out. In the end, Bhootnath witnesses that Chhoti Bahu has become an alcoholic, her husband is partially paralyzed, and the family has gone bankrupt. The magnificence of the grand mansion disappears that stands as a dilapidated shell of its erstwhile self. In the last scene, we see Bhootnath has become a civil engineer and is given the task of bringing down that very mansion where he found shelter when he first arrived in Calcutta!

V.K. Murthy (cinematographer) and Hemant Kumar (Music Director) were involved in its production. Though a black and white film, it had excellent photography coupled with outstanding Bengali music and great performances by the actors. Sahib Bibi Aur Ghulam was hugely successful in showcasing the Bengali culture that was prevalent in 19th century Calcutta. It was nominated for the Golden Bear at the 13th Berlin International Film Festival and was chosen as India’s official entry to the Oscars, however, it was not accepted as a nominee by the Academy citing the reason that “a woman who drinks was not permissible in their culture”.

Today several grand mansions in West Bengal belonging to that era are being restored to their original glory to be run as heritage hotels. The Rajbari Bawali is the South 24 Parganas District (3 hrs drive from Kolkata) is worth a mention. The delightful heritage property makes for an ideal stopover at the beginning or end of a tour of West Bengal.

I strongly recommend Sahib Bibi Aur Ghulam to anyone who wants to know how Calcutta evolved from being a small town to one of the centers of power of British colonial rule.