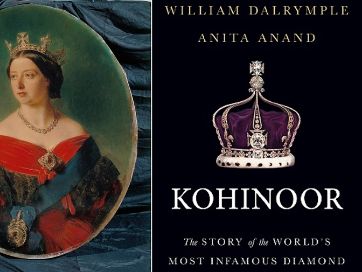 This is the story of the World’s most infamous diamond, the Koh-i-Noor (Mountain of Light), arguably the most celebrated and mythologized jewel in the world. Parables, history, religion, and culture intertwine to give you a treasure trove of information, not only of the jewel itself, but on the society, land, and historical events interwoven with its meandering and unexpected existence. The book has two parts. The first part is written by Dalrymple and the second is by Anita Anand. While the first part focuses on the diamond in the Mughal era, the second part covers its intrigues while with the rulers of Punjab.

Dalrymple notes: The Mughals, perhaps more than any other Islamic dynasty, made their love of the arts and their aesthetic principles a central part of their identity as rulers. They consciously used jewelry and jeweled objects as they used their architecture, art, poetry, historiography, and the bedazzling brilliance of the court ceremonial to make visible and manifest their imperial ideal, to give properly imperial splendor and even a sheen of divine legitimacy.

The accounts of jeweled thrones, clothing, daggers, and other luxurious objects are a fashion designer’s dream come true. The funny part is that diamonds were not even the most desired at the time, with emeralds and rubies holding the top spots. Undoubtedly, this was one of the largest and most beautiful pieces of diamonds in the world at the time and the author compares other similar diamonds of the time.

In the second part, conflict and death surround the Koh-i-Noor much more. Greed, treachery, murder, and torture muddy its sparkle until it finally reaches the crown of Queen Elizabeth, the Queen Mother. The resulting controversy of colonialism and appropriation continues to date where many Indians and Pakistanis remember the diamond which became a symbol of the colonial loot.

Both the authors tell their tale with verve and honesty. Authoritative and scholarly, this is history at its most compelling and invigorating. If you get a chance to hear Anita Anand in person, reading from the book, it is the most dramatic and fascinating experience, which I was fortunate to be a part of.