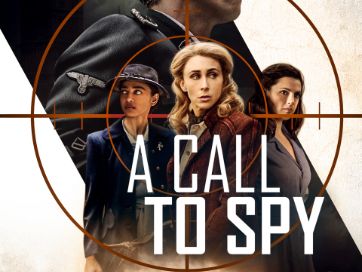 The secret world of spies has always intrigued me. And if the spies are women, it adds an extra layer of interest. Lydia Dean Pilcher’s 2019 film ‘A Call to Spy’ was thus an engaging watch for me. In a nutshell, the film is based on three British women spies, who helped the Resistance in German-occupied France. The backdrop is of course the World War II.

The trio is made up of Virginia Hall, Vera Atkins, and most interestingly for me, Noor Inayat Khan. A descendant of Tipu Sultan, the ruler of Mysore in the eighteenth century, Noor, trained as a wireless operator was the first woman to be sent to France in that capacity. Radhika Apte, the darling of the Indian web world, plays Noor brilliantly in this film.

I was excited about watching Apte’s portrayal of Noor and she did not disappoint. She depicts Noor’s pacifim and her quiet bravery in an effortless yet deeply impactful performance. Noor’s life is rich and layered, and the film offers tantalizing glimpses of it. I am especially glad that after decades of the remaining unknown, the extraordinary life of Noor is finally getting the recognition that it deserves.

In fact, the film made me want to see more of Noor on screen. I couldn’t help wondering how much better ‘A Call to Spy’ would have worked as a limited series. There is so much more to these women and especially Noor. They deserve more screen time. I’m happy that a web series is being made on Noor’s life. I can’t wait for it, to be honest.

All said, watching Noor’s life on-screen was the perfect Women’s Day celebration for me. She made me proud to be a woman and made me realize that the world is ours for the taking.

The Noodle Maker Of Kalimpong: Reviewed by Kuntil Baruwa